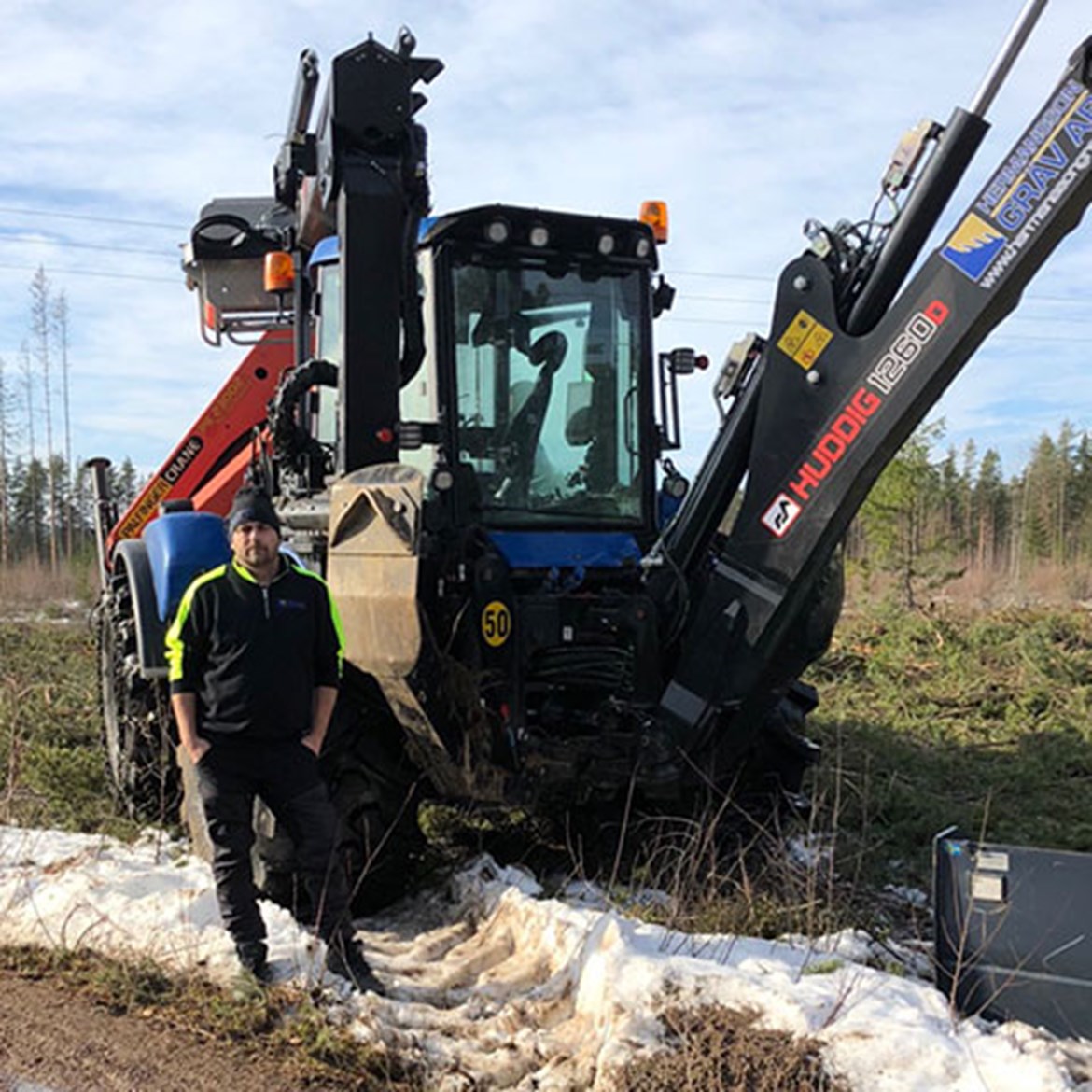 Today, the company has 31 employees and an impressive machinery park consisting of 20 machines, a machine trailer and a gravel truck. Eight of the backhoe loaders are HUDDIG machines of different models - three 1260D with lift, three 1260C with lift and two 1260B. Three of the HUDDIG machines are equipped with a crane in the loader to be able to change poles and build power lines.

- We mainly run electricity and fiber contracts for customers such as Vattenfall, Infratek, Linjemontage and the municipalities nearby, says Per. For line work we always use HUDDIG. The first time I drove a HUDDIG was in 1991 when my uncle bought a 760. A few years later my father bought a 960. I had driven Volvo BM 646 and Hymas 474 before but driving a HUDDIG was something special.

The advantages of a HUDDIG backhoe loader are many according to Per.

- The ability to move in terrain is completely unbeatable thanks to the swinging waist. You can go almost everywhere, which is absolutely crucial while plowing cable during line work. And of course, the hydraulics are fantastic! With Huddig's joystick you get such a special feeling and precision, which is perfect when you aim a pole or follow a cable when digging. Having a front bucket is also very handy for when you want to move things.

Per says that Hermansson's are in need of machinists but that it is difficult to find the right people for the work.

- Many of the talented people are already hired. Just being able to drive backhoe loaders isn’t enough, you need to have a genuine interest, says Per. Driving a HUDDIG is demanding for you as a driver. The machine has a huge capacity as a tool carrier, with things like a personal basket, crane in the loader and various hydraulic tools. The waist control provides agility in the forest and the big wheels and the transmission provide transport speed, but it also has its downsides. You have to plan your work at a different level. In the hands of the right driver, HUDDIG is unbeatable, you can do almost anything with it, says Per.

For a number of years, Huddig's dealer Maskin Väst in Karlstad has sold and serviced Pers machines. The exception is when Per has machines at work around the country, then he turns to the closest service provider. The machines should be serviced every 500 hours. The machinists are responsible for keeping in touch with the service provider and to ensure that the machines are handed in. - There will be quite a few turns with the trailer to Karlstad considering how many machines we have, so of course it is important to have a good relationship with the service provider, which I think we have with Maskin Väst, says Per. Per thinks Hermansson’s machinery will expand and buy another HUDDIG within a year or two. - In my opinion Huddig has succeeded well in both improving existing features and developing new one. The visibility from the cab has become a lot better. It is also much quieter in the cab nowadays, which is nice as there can be long work sessions in the machine. I see no reason not to continue driving HUDDIG, says Per.