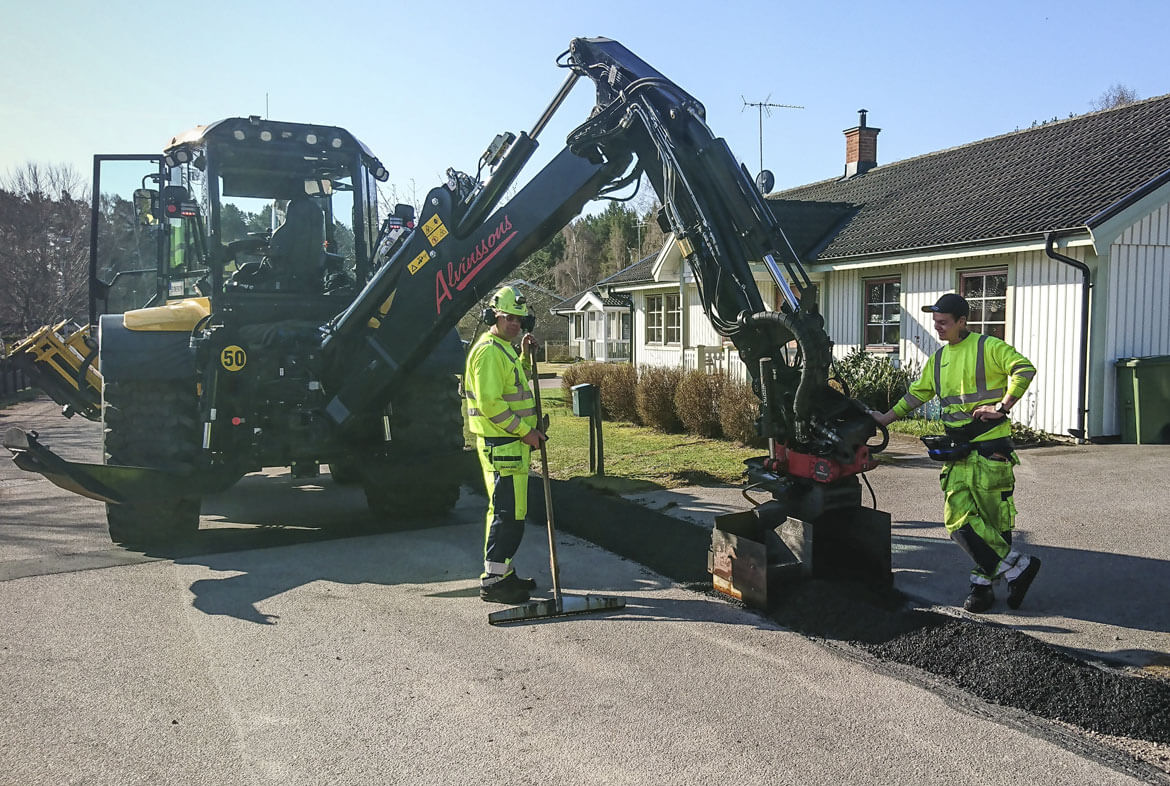 Alvinssons AB in Mönsterås, Sweden is owned by the three Alvinsson brothers and their cousin. The construction company was founded in 1966 by their fathers, so all four of them have grown up in the machine contractor business where they all shared a common interest in machines from an early age. Today, the company owns five HUDDIG backhoe loaders, two conventional excavators and four trucks. Job requests are numerous, and the future looks bright.

Mattias Alvinsson has been operating backhoe loaders since 1994 and operates the machine for around 1600 hours per year. He is responsible for all excavation jobs that Alvinssons takes on. For many years he operated Volvo backhoe loaders, and it was only after some serious thought that he changed brands and went over to HUDDIG. The strength and versatility of the machine and the comfort of the cabin was what finally made him change his mind. He bought his first HUDDIG in 2005, a HUDDIG 1160. Since then they have acquired a 1060, a 1260, a 1260C and now also a 1260D.

Alvinssons currently employs 27 people and carries out a variety of jobs, ranging from garden planning and placing concrete slabs to asphalt adjustment and snow removal. They run their own projects and also work on an hourly basis for clients such as NCC and Skanska. One of the company's five HUDDIG backhoe loaders is rented by the Mönsterås municipality for the majority of the time.

“The best thing about the job is the variation between tasks. No two days are alike. Both the assignments and the people we work for change and everyone has different routines, expectations, budgets and requirements”, says Mattias. “The fact that we own and run the company together as a family is also great fun.”

Mattias believes that the main advantage of a backhoe loader compared to an excavator is the versatility. The two conventional excavators are only used half the time compared with the HUDDIG machines.

"It's all about using the machine in the right context and using it properly to get the most out of it”, says Mattias. “It depends a lot on the driver as well. Once you have learned to operate a HUDDIG correctly, there are few machines that you can get as many hours out of as a HUDDIG.”

To be able to have high usage all year round, both proactivity and creativity are necessary – which are qualities that Mattias definitely has. A great example is the asphalt paver he designed himself. There was no good tool for making minor fixes and adjustments after all the fiberglass installations made around the municipality and he therefore took the matter into his own hands. He built an asphalt paver mounted directly onto the excavator that is controlled from inside the operator´s cab. With this he can carry out repairs with a width of between 15 cm and 1 meter. He has also modified an already existing asphalt paver with a hydraulic control valve that allows him to operate both curvature and width from the outside, while operating his HUDDIG via radio control. The advantage of this is that he can help the person using the asphalt rake and double the amount of asphalt they can lay in a day.

Buying a new machine is relatively easy. After that it is important to find a good after sales service representative who can help with maintenance and spare parts at short notice. If Mattias has the time he can carry out maintenance himself, but sometimes he needs help from an aftersales service technician. Mattias bought his first HUDDIG from the company EM Service in Löbberöd, Sweden which at that time both sold and serviced HUDDIG machines. It worked well but was a bit far to go if they needed something done quickly. When it was time to buy the next HUDDIG machine, Mattias chose Vöxss in Boxholm. He’s had a good relationship with the sales person Tommy Andersson for many years now and also with their after sales service representative Mats Axelsson at Smisab in Skruv.

Mattias looks brightly towards the future. He thinks the job is a lot of fun, the customers seem satisfied and the cooperation with the brothers and the cousin works well. Not much to complain about. Now he’s looking forward to a summer with a good mix of work and holiday leave.