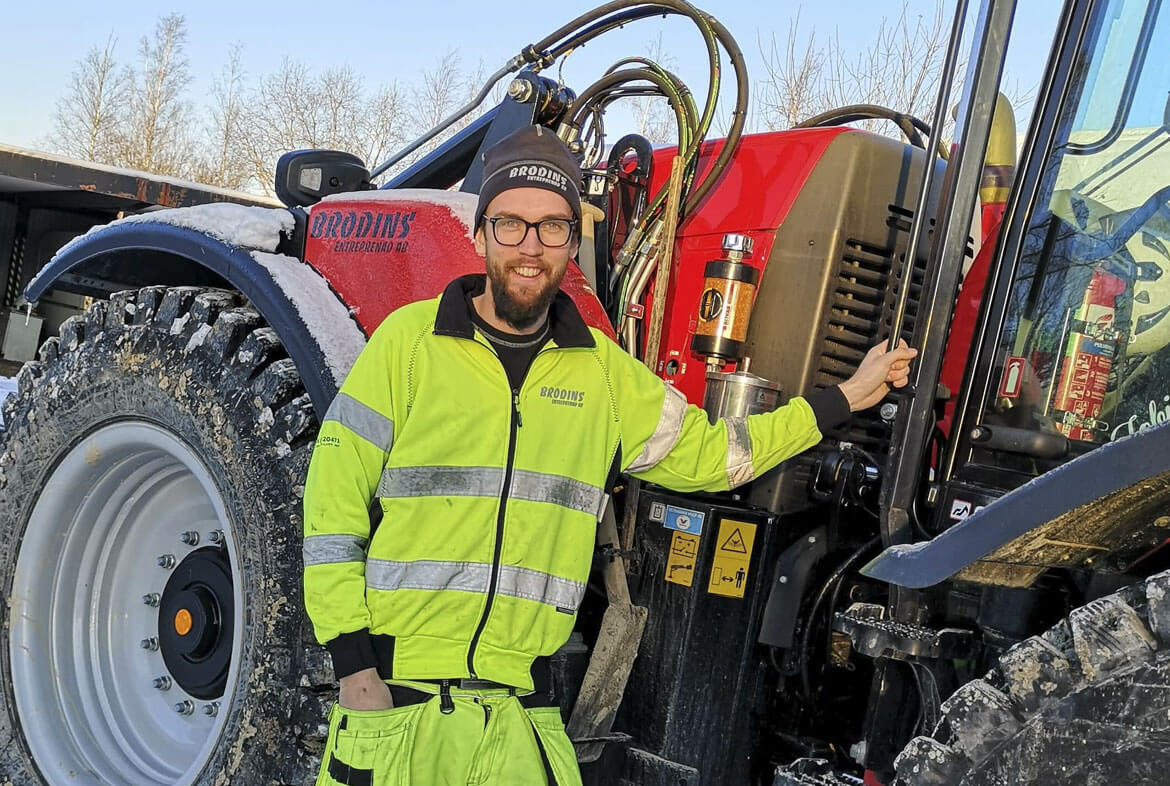 Tobias Brodin has been running Brodins Entreprenad AB in Gävle with his father since 2010. In the company, they carry out many different types of work, which makes Huddig the obvious choice.

"We work with sewage treatment, house foundations, cable, fiber, and everything in between. That is why we have stuck to Huddig, which is a real multi-machine that can be used for everything."

Right now, Tobias is working with service and maintenance of electricity grids with his Cable-equipped HUDDIG 1260D and LIFT 2000 where accessibility is a big plus.

"I exchange and erect poles and do all kinds of line work with my Huddig, a large part of which is maintenance work. The biggest advantage is the accessibility when I carry a pole or transformer in the excavator. The machine is very reliable and moves smoothly in harsh terrain even when it is heavily loaded, which is my situation nine days out of ten."

Tobias’s specialty is cable shooting and for this work, he has great benefit from the radio control which provides good flow.

"The radio control allows me to use the machine fully when, for example, cable shooting. I have a cable feeder mounted on the excavator arm that feeds the cable into the hose. I can stand outside, in full charge with the radio control, and see everything that happens. If needed, I can quickly adjust the rollers and get a good flow at work. With the drum in the loader, I have equipment both front and rear of the machine which is a big advantage that you do not have on an excavator."

In addition to the radio control, the digging system is something that Tobias uses almost daily and that saves both time and money.

"I have a 2D system, which among other things helps me to keep the right depth in the shaft and the correct slope when digging. Recently it came into use when we renovated an electric track where we could use the system to erect the poles completely straight. It saved a lot of time and money."

It is not uncommon for a HUDDIG to go from generation to generation, and so it was in Tobias’ family.

"I inherited a HUDDIG 1160D from my grandfather that we later replaced with a HUDDIG 1260C. The development of the technology between the models felt like night and day. It is fascinating that Huddig manages to improve the machines on so many points with each new model. In the HUDDIG 1260D we have now, the visibility is even better, and the performance has been further increased compared to the previous model. In fact, we also have our own accessories that Grandpa designed on his own. It is an extra pair of wheels with Robson operation which we hang in the loader. Practically it gives the machine a six-wheel drive. This way, we can easily pass obstacles in the terrain like deep ditches, instead of dragging our way through with the bucket."

"Anything that can be an aid or improvement in our daily work is something I am interested in participating in. I often ponder things that we could improve to become even more effective and it is going to be very interesting to see what news Huddig presents in upcoming models," Tobias concludes.