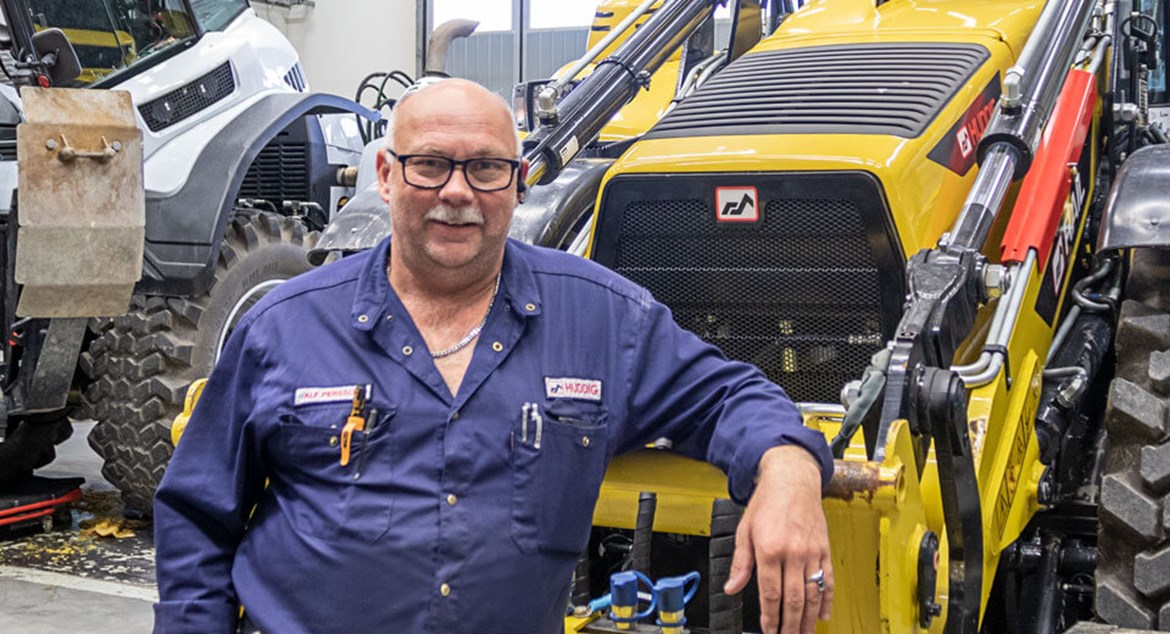 Alf started as an intern at Hymas welding department in 1979, which later in 1986 changed its name to Huddig. Since then, he has worked with all HUDDIG models, from the very first one developed in 1986, to the latest hybrid backhoe loader TIGON. In his role as a prototype builder, Alf works with innovation projects where the designers' ideas are tested and some of them later become reality.

"I started at the company Hymas in 1979, which later became Huddig. Now, 42 years later, I am driven by the same curiosity and desire to improve every model. Going from HUDDIG 740 with a Perkins engine of 96hp to HUDDIG TIGON which is the first diesel hybrid backhoe loader on the market is a big leap. The development journey we are on together is incredible", Alf says.

Alf and his colleagues in the development department work in close collaboration with the designers where they realize their sketches by building prototype machines. During his time at the company, Alf has worked at every station in the workshop, such as sheet metal, welding, machining, and all stations regarding assembly. For the past 20 years, he has had the role of prototype builder.

"My colleague Fredrik and I have worked together for almost 10 years. We have a saying that no two days look the same here at the development department - it all depends on what stage we are in the project. My work today mainly consists of testing, measuring, and assembling the designers' drawings and ideas. Some days I perform lot of assembling, other days I mostly do measurement or test-drive machines. I enjoy the variation and it's exciting to build the designers' new ideas and see if they work.”

Huddig's development department has some of Sweden's sharpest mechanical engineers. They work constantly to optimize the interaction between hardware, software and hydraulics to continue to produce the most advanced backhoe loader on the market.

"If you compare what the backhoe loader looks like today and what it looked like a few years ago, there´s a huge difference. One of the biggest improvements we have made is the computer control and hydraulics, which have highly improved and simplified the work for machine operators in a variety of ways. We always take our customers' experiences of the machine into account and use their feedback and all our combined experience to improve each HUDDIG model. It never ceases to fascinate me that the development is constantly advancing, we will never be done.”

Since Alf first set his foot at Huddig for the first time in the 80's, the company has established itself in a global market and there is a demand for HUDDIG backhoe loaders all over the world today. The first HUDDIG TIGON has now also been delivered to a customer after the launch in 2015.

"We have very exciting things going on and Huddig is constantly developing new things. Innovation is a strong keyword here and it feels exciting to go to work when you see how new machine types come to market and make an impression. Now with TIGON, I believe that, even though we are a small company in terms of employees, we have taken the first step in the electrification of the construction industry. It is a journey that I look forward to continuing”, Alf concludes.