Peder Wik started as a CNC operator at Huddig's Mechanical Department in August 2010. Today he is the designer in a completely different department.

"The potential for personal development at Huddig is fantastic. That's what makes me feel so good here. I think my journey is a great example of the potential that exists here. It is actually possible to take a step from one role to another. Then I think of the atmosphere here too and that I have such good colleagues, he says.

The fact that Peder even ended up with Huddig was due to him being offered the opportunity to study his fourth year at Bromangymnasiet College's Industrial Engineering Program (HIT), where the students learn practical hands on four days a week at a technology company.

"I was told Huddig was looking for a good CNC operator. Because that was what I was qualified as, Huddig was my first choice and I got the placement.

After the placement he was offered permanent employment at the company.

"I worked as a CNC operator until 2014. Then I got the chance to go to the Design Department instead, because resources were needed there and I had drawn a little bit before that. I did a bit of both roles for a while, but now it's 100 percent design for me, he says. 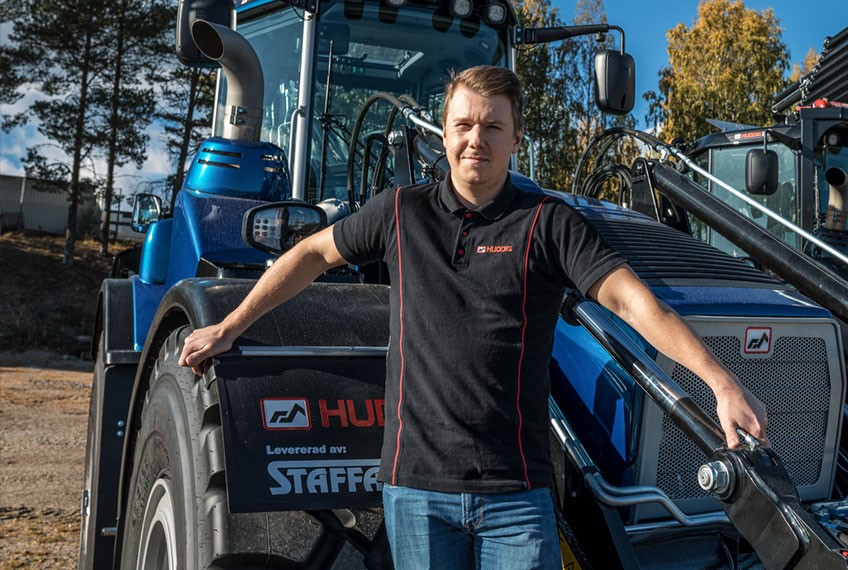 Peder changed roles because he wanted to take on new challenges.

"I came to a point where I felt my development had stopped. I had come into Huddig as a CNC operator and learned how all those jobs could be done. Sometimes new things came in and then it was fun. But it wasn't very often. Here on the Design Department, hardly a day goes by without me learning something new.

Today there are nine regular designers at Huddig and the group works very multifunctionally.

"I think that is positive. It is not a designer who operates hydraulics, or who does the metalwork and so on. Of course, we have our specialties. But it is still very mixed. For example, I work on most sheet metal and welded designs. But I'm also dealing with hydraulics. There has also been electronics in the form of the 90-volt battery for Tigon, says Peder.

If you want to be a designer, Peder believes that having an interest is an important part.

"I do not have the academic education that many other designers have. But I have a real interest and I've had it from the very beginning. Perhaps not just for backhoe loaders and construction machines but for cars, engines and machines in general. I knew about diesel engines before. I know how they work. It has helped a lot, he says.

And even in his spare time its engines and cars that still hold his attention.

"I like American cars. Right now I have a Chevrolet Camaro from 1969 that will be my focus for a while. It's in its original condition right now, but that's not how it will stay. I like drag racing as well. I've raced a little bit and usually travel around to see competitions. The idea is to get that car on a track as well. But before that, a lot of work has to be done", he concludes.